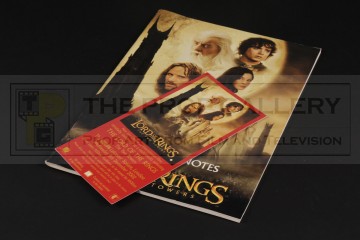 Lord of the Rings: The Two Towers

An original booklet & screening pass from the production of The Lord of the Rings: The Two Towers, the 2002 fantasy epic directed by Peter Jackson.

This booklet of production notes and screening ticket were issued by Entertainment Film Distributors to members of the press. The 48 page booklet features a wealth of information relating to the production and the ticket is for a preview screening which took place on 11th December 2002, the morning of the British premiere, at The Odeon, Leicester Square, London

The booklet measures approximately 11.5" x 8" and the ticket 8" x 4", both remain in very good condition.