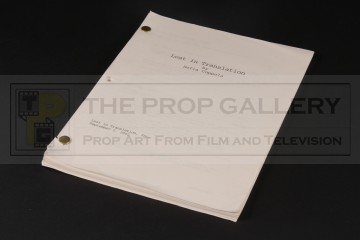 An original script used in the production of Lost in Translation, the 2003 picture starring Bill Murray under the direction of Sofia Coppola.

This original production used script is dated September 2, 2002 and comprises of 117 double sided pages with the cover type written with the title of the movie and writing credit to Sofia Coppola.

A fine example of original production material from this highly regarded picture which saw Coppola win the Academy Award for Best Original Screenplay.