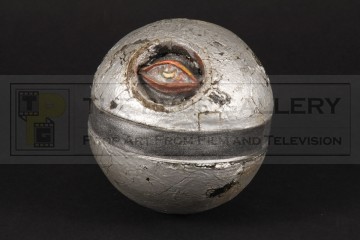 An original prop used in the production of Mighty Morphin Power Rangers, the superhero television series produced by Saban Entertainment.

Growth bombs such as this can be seen by Lord Zedd throughout Season 2 to enlarge his monsters. This stunt version designed to be thrown is constructed from foam and features a red eye with to one side with a material tape around the centre, finished in silver paint the prop measures approximately 5" in diameter and remains in good production used condition exhibiting some paint wear and cracking.

A recognisable and displayable artefact from this popular series.