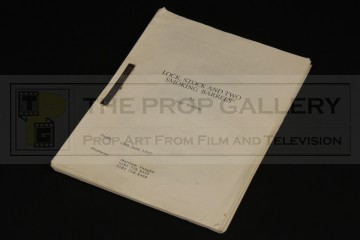 An original script used in the production of Lock, Stock and Two Smoking Barrels, the 1998 crime picture written and directed by Guy Ritchie.

This original production used script is dated 19th June 1997 and comprises of 102 pages in addition to the front cover which features the title of the movie and writing credit to Guy Ritchie. This early draft features a number of significant differences to the final movie to include a different start, end, additional characters, numerous dialogue changes and Jason Statham's character being called Jim rather than Bacon.

The script remains in very good condition with some wear to the font cover from use and handling, exhibiting minor rusting to the binding strip, otherwise fine.