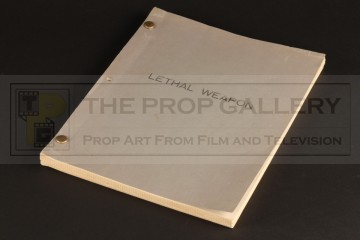 An original script used in the production of Lethal Weapon, the 1987 action picture starring Mel Gibson and Danny Glover under the direction of Richard Donner.

This is an original production used second draft script dated January 6, 1986 comprising of 106 pages in addition the interior title page which is hand inscribed with the number 93 and a further page featuring character biographies for Sergeant Martin Riggs (Mel Gibson) and Detective Sergeant Roger Murtaugh (Danny Glover), this bound between front and rear covers of grey card with the front featuring the movie title 'LETHAL WEAPON' in silver print. This early draft script features a number of significant differences to the final cut of the movie with this example containing sequences cut from the movie, lacking others, with different detail and dialogue to various scenes, these differences include, but are not limited to, the following.

A rare and thoroughly interesting example of original production material from the first instalment of this classic action franchise.