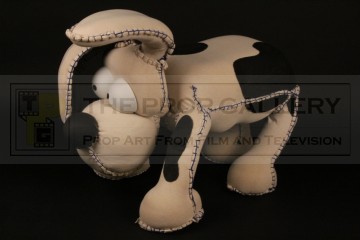 An original puppet used in the production of the hit children's television series Tom and Vicky voiced by Richard Attenborough and Rik Mayall and directed by Martin Pullen.

This is the original large scale Kevin the Dog stop motion animation puppet which would have been used where a larger Kevin was required. The puppet is constructed from a hard material, likely plastic, and covered in material which has been hand painted and stitched to create the signature Tom and Vicky look. Kevin's face, legs, tail and ears have a metal armature to the interior making him a fully poseable and versatile puppet which can be placed in almost any position.

Kevin remains in excellent condition with damage to one ear where the interior metal armature has broken where it joins to the head meaning his ear has a permanent droop. He measures a very impressive 36" long and approximately 16" wide.

A fantastic example of a lead character puppet and an imposing display piece from this well received children's television series.