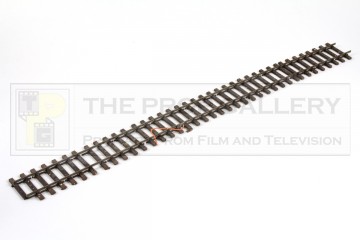 This is an original section of track as used on the various sets throughout the series, the track is O gauge with the rail width being approximately 32mm, the narrow gauge engines and rolling stock ran on this type of track during filming. Constructed from plastic with metal rails the sleepers have been painted dark brown by the production team with small holes drilled which were used to attach it to the set, a piece of wire is soldered to the rail and examples of chippings remain present.

The track section measures an impressive 24" long at its widest point and remains in very good production used condition.

A highly displayable artefact from this popular children's television series.