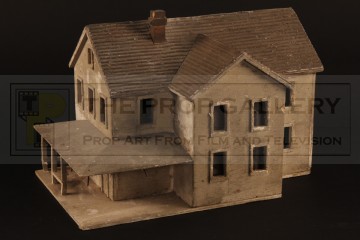 An original miniature used in the production of Labyrinth, the 1986 fantasy picture starring Jennifer Connelly and David Bowie under the direction of Jim Henson.

This is an original miniature used in the closing shot of the movie as we see Jareth (David Bowie) in his owl form flying away from Sarah's (Jennifer Connelly) house. This house formed part of the miniature set built by the model unit for the shot, constructed from plywood with the roof tile detailing cast in resin the miniature features various windows with a large hole to the base allowing it to be lit from the interior.

The miniature measures approximately 11" x 8.5" at its widest points and stands 7" high, it remains in good production used condition with some paint wear and missing some details such as one of the small chimneys to the roof and decorative railings to one side of the miniature.

A rare and displayable artefact from the production of the cult fantasy classic.