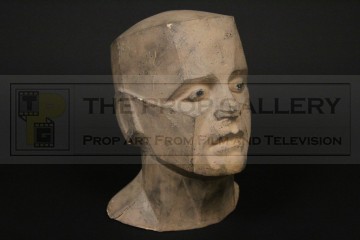 Kryten head - Beyond a Joke

This head was used on screen in the series VII episode Beyond a Joke written by Robert Llewellyn. After Lister requests brown sauce to accompany his lobster Kryten's head explodes so the crew board the SS Centauri in search of a spare head, finding this, and others before running into the Rogue Simulant.

The head was constructed by the BBC Visual Effects Department and is cast in fibreglass with a foam insert to the interior base which is dressed with wire to simulate circuitry, the head is painted and weathered to give a dirtied down appearance due to being aboard the derelict ship and sports a wire bracket to the back for hanging. This head can be screen matched to the middle of the three seen on screen, the one handled by Lister aboard the SS Centauri and later by Kochanski as the crew return to Starbug.

The head stands an impressive 13" tall and measures 9" across the base, it remains in excellent production used condition with only very minor paint loss in areas.

With the masks worn by Llewellyn in his role as Kryten being prosthetic this represents a rare opportunity to acquire a head of fibreglass construction with none of the degrading issues associated with prosthetic masks.

A very displayable artefact from this cult television series.