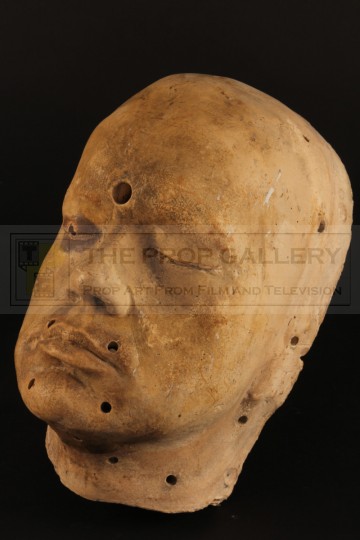 An original lifecast used in the production of Amazing Stories, the 1980s anthology series created by Steven Spielberg.

From the Season 1 episode Mirror Mirror directed by Martin Scorsese this is an original make-up effects lifecast used during the creation of the prosthetics worn by Tim Robbins as the mysterious figure which haunts horror novelist Jordan Manmouth (Sam Waterston) when he looks into a reflective surface. Make-up effects were provided by The Burman Studios with whom Spielberg had previously collaborated on his 1977 hit Close Encounters of the Third Kind, this lifecast was taken from actor Tim Robbins and used during the creation of the prosthetic make-up appliances the character wears on screen. Constructed from high quality plaster the lifecast features a number of holes in the areas where appliances were worn and is hand inscribed 'TIM ROBBINS' to the back in black marker.

An extremely rare artefact from the production of this well received series.