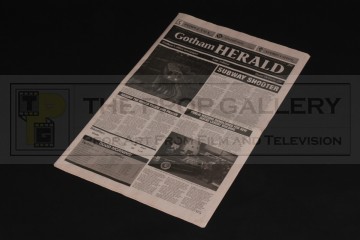 An original prop used in the production of Joker, the 2019 thriller starring Joaquin Phoenix under the direction of Todd Phillips.

This is one of several types of newspaper custom printed for the production which can be seen around Gotham City. Printed on traditional newspaper stock the Gotham Herald features the headline 'SUBWAY SHOOTER' and a lengthy article regarding the deaths of three men at the hands of Arthur Fleck (Joaquin Phoenix) and describes the perpetrator as wearing a clown mask, various other articles relating to Gotham City present with an advertisement for a Gotham car dealership to the back page. The newspaper features various period articles to the interior, some of which are repeated, and comprises of a total of 32 pages, examples of this paper can be seen on the newsstand at which Fleck stops and looks at newspapers following the events.

The newspaper measures 23" x 14" when closed and remains in excellent production used condition with the traditional fold across the centre, very minor wear from use and handling, overall fine.

A rare artefact from this highly regarded production which saw Joaquin Phoenix win the Academy Award for Best Actor.