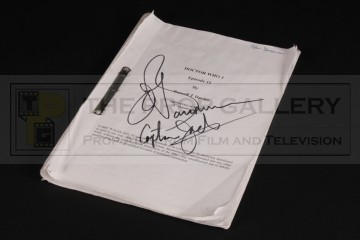 From the 2007 episode Utopia starring David Tennant as The Doctor this original production used shooting script was issued to and used by John Barrowman who portrayed Captain Jack Harkness. The script is dated 4th January 2007 and comprises of 55 pages in addition to the front cover which features the title of the series with writing credit to Russell T Davies, this hand inscribed with Barrowman's name to the top right corner. To the interior every page of the script is watermarked 'DW3 EP11 SHOOTING, JOHN BARROWMAN' with highlighter pen over his dialogue, the front cover has been signed by Barrowman in black marker and inscribed 'CAPTIAN JACK' below.

The script remains in very good condition exhibiting some edge wear from use during the production and a tear to the back page, interior excellent.

An extremely rare example of a principal cast member script from this cult science fiction series.