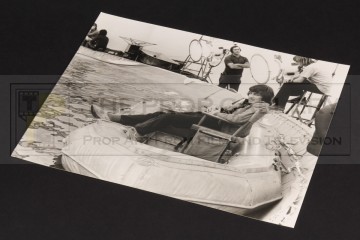 An original crew still from the production of Jaws, the 1975 thriller starring Roy Scheider, Robert Shaw and Richard Dreyfuss under the direction of Steven Spielberg.

This vintage original black and white still is printed on glossy photographic paper and shows director Steven Spielberg relaxing in his directors chair in a water tank, this was possibly taken in the Esther Williams tank at MGM Studios where the cage attack scene was filmed. To the verso the still features a paper snipe which offers information regarding the production.

A rare still from this highly regarded Academy Award winning box office smash which on its release became the highest grossing picture of all time.