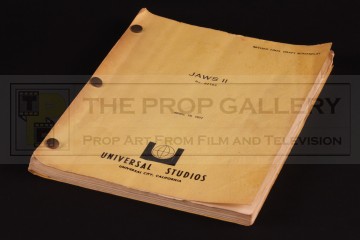 An original script used in the production of Jaws 2, the sequel to Steven Spielberg's 1975 classic starring Roy Scheider.

This original production used script is dated April 19, 1977 and comprises of 116 pages in addition to one detailing the principal sailboats bound between front and rear covers of yellow card with the front featuring the title of the movie 'JAWS II' and the Universal Studios logo to the bottom. The script contains numerous blue revision pages dated 4/25/77 and features a minor hand inscribed annotation to the list of sailboats page.

An extremely rare example of original production material from this classic thriller franchise.