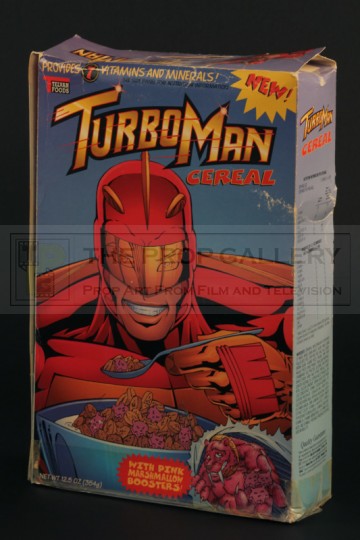 Jingle All the Way

An original prop from the production of Jingle All the Way, the 1996 festive family comedy starring Arnold Schwarzenegger.

This is an original cereal box custom made by the production for the scene in which Jamie (Jake Lloyd) is seen eating breakfast. The cereal box features the likeness of Turbo Man to the front with a game to the rear and various nutritional information to the sides. The box was originally taped along the inside side seam with double sided tape which has dried out and further tape having been applied most notably to the bottom, this now very old itself.

The cereal box stands in impressive 11.5" high and measures 7.5" wide, it remains in good condition with some creasing and minor paper loss to the surface.

An instantly recognisable and displayable artefact from this memorable family comedy.