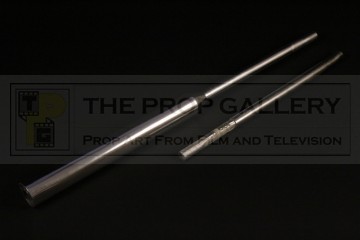 An original plutonium rod used in the production of the 1999 James Bond picture The World Is Not Enough starring Pierce Brosnan as the suave spy.

This is an original prop plutonium rod used in the reactor chamber of the submarine at the climax of the movie as Bond and Renard (Robert Carlyle) fight to the death. The rod is constructed from perspex and plastic with a chrome effect finish to simulate metal and features interchangeable heads which slot in to the main body of the rod. The second of these heads is constructed from foam rubber with a silver paint finish and would have been used as a safer alternative for stunt work. The rod is accompanied by a one line schedule covering filming dates in June 1999 with the relevant interior submarine reactor room filming dates having been outlined in red pen.

The plutonium rod measures approximately 36" long when assembled with the main body of the rod being 2.5" in diameter, it remains in generally excellent condition with some minor wear and scratching to the finish from production use.

A memorable and displayable artefact from one of the most celebrated franchises in cinematic history.