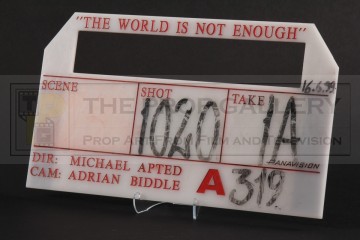 An original clapperboard used in the production The World Is Not Enough, the 1999 James Bond picture starring Pierce Brosnan as the suave spy.

This is an original face used on one of the modern style digital clapperboards during the production, these are made to be removable allowing the more expensive digital boards to be utilised on several productions rather than just one as was common with the more traditional sign written slates. Constructed from white acrylic the A camera board features the title of the movie etched in red lettering in addition to the names of director Michael Apted and cinematographer Adrian Biddle, the spaces to record the scene, shot and take numbers retain some hand inscribed writing from its last use during the production with the date 16.6.99 to the right, two strips of Velcro present to the verso for attaching the face to the digital board.

The clapperboard face measures approximately 11" x 6.5" and remains in excellent condition exhibiting some light surface wear from use during the production, overall very fine.

A highly displayable artefact from one of the most celebrated franchises in cinematic history.