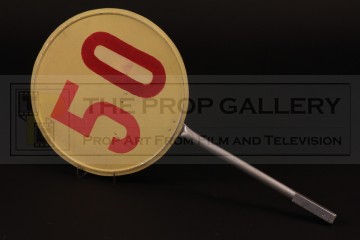 James Bond: For Your Eyes Only

An original prop used in the production of the 1981 James Bond picture For Your Eyes Only starring Roger Moore as the suave spy.

Ski jump distance markers such as this can be seen used in the scenes where Bond accompanies Bibi (Lynn-Holly Johnson) to the biathlon and is pursued by henchmen down the ski jump where these markers can be seen down the side of the course. The marker is constructed from metal with a yellow paint finish features the number 50 to both sides in red paint with the zero painted over a number nine, this atop a metal pole which is riveted to the sign.

The round marker element measures approximately 14" in diameter with a total height of 27.5" including the pole, it remains in very good production used condition with some paint and edge wear.

A displayable artefact from one of the most celebrated franchises in cinematic history.