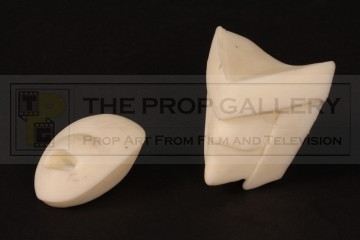 A pair of puppet appliances from the production of James and the Giant Peach, the 1996 fantasy picture produced by Tim Burton and directed by Henry Selick who had previously collaborated on The Nightmare Before Christmas.

These appliances were created by the production for use on the puppets for Mrs. Ladybug and Mr. Grasshopper which were used to bring the characters to life using stop motion animation, in this instance the replacement method where the mouth is an individual appliance attached with magnets which can be interchanged to provide the various expressions required on screen. Constructed from high quality resin this lot comprises of one mouth appliance for each of the aforementioned characters which feature magnets to the back and the hand inscribed numbers.

Both appliances remain in excellent production made and unpainted condition with some light surface wear and measure between 1.25" and 1.5" respectively.

An affordable example of original material from this well received stop motion picture.