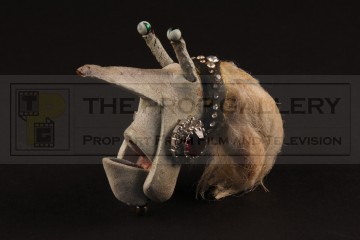 This is an original puppet head for the character of the Glowworm voiced by Miriam Margolyes, the intricately constructed puppet head features an internal metal armature with a hand painted foam skin, poseable jaw and eye antennae and detachable eyeballs allowing the crew to animate it as required and is decorated with various design elements.