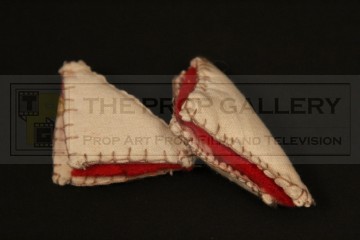 Constructed from material which has been hand painted and hand stitched to create the signature Tom and Vicky look sandwiches such as these can been seen offered to the children by granddad in multiple episodes of the series.

The sandwiches measure approximately 2.5" along the longest side and remain in excellent production used condition.