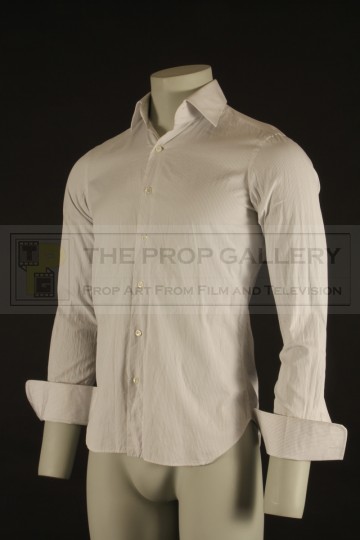 An original costume used in the production of Wall Street: Money Never Sleeps, the 2010 drama sequel starring Michael Douglas under the direction of Oliver Stone.

This style of shirt can be seen worn on screen by Shia LaBeouf as Jake Moore as he and Winnie (Carey Mulligan) meet with Gordon Gekko (Michael Douglas) at the restaurant. The white with grey pinstriped shirt features a double button collar and French cuffs and was bespoke made for LaBeouf by noted theatrical tailors Anto of Beverly Hills, tagged with his initials below the interior label with the date August 2009, this label additionally hand inscribed 'FOX'.

A fine example of principal character wardrobe from the production.