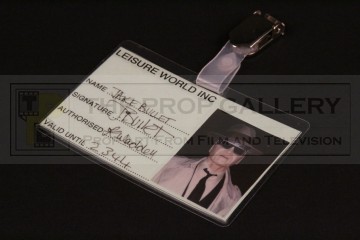 This ID card was used on screen in the Series V episode Back to Reality where the crew find themselves awaking to realise that they have spent the last four years playing the Red Dwarf Total Immersion Video Game and they are not really who they thought they were. They go on to learn their 'real' identities where we first see Danny John-Jules' unforgettable portrayal of dorky alter-ego Duane Dibbley.

Leisure World identification cards such as this are seen on the cases which contain the crews belongings and as they discuss their findings, this one being for Kryten's alter-ego Jake Bullet, a cybernautics division detective. The prop ID features Bullet's picture with name, signature and other details, accomplished on green card, laminated with affixed plastic hanger and metal clasp.

The ID measures approximately 4" x 2.5" not including the hanger and remains in excellent production used condition.

A displayable artefact from an episode widely considered among one of the best ever of this cult television series.