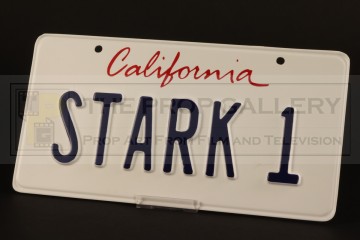 An original prop created from the production of Iron Man, the 2008 superhero picture starring Robert Downey Jr. in the title role.

This licence plate is one of a number created by the production for use on Tony Stark's (Robert Downey Jr.) cars, constructed from vacuum formed plastic the plate features the registration 'STARK 1' with the state 'CALIFORNIA' printed to the top in red lettering, two holes to the top allowing it to be attached to a vehicle during the production although ultimately not seen on screen.

The plate measures approximately 12" x 6" and remains in excellent production made condition with only very minor surface wear, overall fine.

A displayable artefact with obvious ties to this superhero blockbuster.