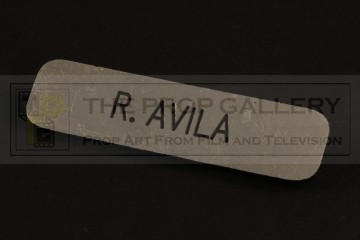 An original name badge used in the production of Internal Affairs, the 1990 crime thriller starring Richard Gere and Andy Garcia.

This name badge was worn by Andy Garcia in his role as Internal Affairs agent Raymond Avilla, the badge is constructed of plastic with the front face of silver finish etched with the name 'R. AVILA', to the verso is an affixed pin allowing the badge to be worn. Interestingly the character is credited Raymond Avilla at the end of the movie, this badge features only one L in the name but is consistent with the one worn on screen by Garcia which also clearly has only one L.