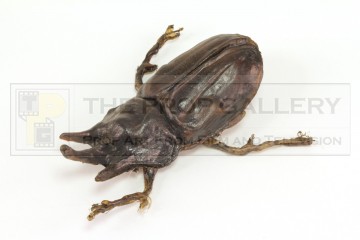 An original prop used in the production of the 1984 picture Indiana Jones and the Temple of Doom, the second instalment in the popular Indy franchise starring Harrison Ford.

This prop beetle is one of a number created for use in the memorable banquet scene in Pankot Palace. The beetle has a hard shell with a coating of latex rubber and hard spindly legs, the rear underside of the prop featuring a piece of velcro where a detachable back would once have been attached allowing the rear of the bugs to be removed on screen and the body filled with an edible food content.

The beetle measures approximately 5" long and remains in excellent production used condition lacking the detachable rear section and one of the front legs, otherwise fine.

A memorable and displayable artefact from one of the most highly regarded franchises in cinematic history.