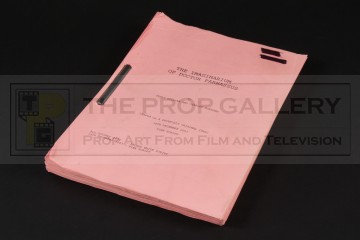 An original script used in the production of The Imaginarium of Doctor Parnassus, the 2009 fantasy picture starring Heath Ledger under the direction of Terry Gilliam.

This original production used script is dated 18th December 2007 and comprises of 115 pink pages in addition to a front cover which features the title of the movie with writing credit to Terry Gilliam and Charles McKeown. The script remains in very good production used condition exhibiting minor cover wear from use and handling, a name blacked out in marker pen to the top corner and appears to be lacking the final page, some soiling in present to one of the interior pages, otherwise very good.