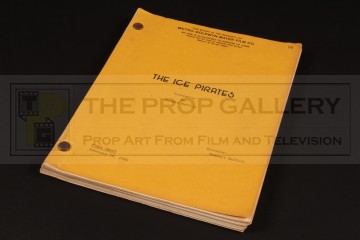 An original script used in the production of The Ice Pirates, the 1984 science fiction comedy starring Robert Ulrich and Mary Crosby.

This original production used final draft script is dated February 10, 1983 and comprises of 120 pages in addition to a title page bound between front and rear covers of yellow card. The front cover of the script features the title of the movie with writing credit to director Stewart Raffill and is hand inscribed with the number 86 to the top corner, to the interior the script features some of the page corners folded over from use during the production.

The script remains in excellent production used condition with some minor wear and toning, overall fine.

A fine example of original production material from this memorable tongue in cheek science fiction comedy.