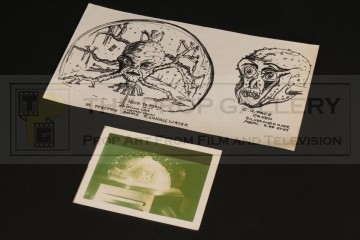 An original concept artwork used in the production of the long running science fiction television series Doctor Who.

From the 1972 serial The Curse of Peladon starring Jon Pertwee as The Doctor this is the original concept design artwork for the alien delegate Arcturas created by BBC Visual Effects Department designer Ian Scoones. Accomplished in black pen on paper the artwork features two drawings of the character with various hand inscribed notes relating to the construction and operation of the prop, this is accompanied by an original behind the scenes studio Polaroid photograph showing the original prop. Both the artwork and photograph were published in Doctor Who Magazine 190 in September 1992 courtesy of Ian Scoones where he discusses his work on the series including this design.

The artwork measures approximately 9.5" x 5" and remains in excellent condition with some glue residue to the verso, the Polaroid measuring 4.25" x 3.5" and in good condition exhibiting colour change due to age, this board backed on genuine Polaroid card stock.

An extremely rare example of original production material from the Jon Pertwee era of this classic science fiction series.