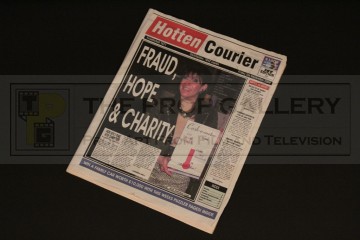 An original newspaper used in the production of the long running British soap opera Emmerdale which was first broadcast in 1972.

This Hotten Courier newspaper dated Friday 5th September covers the storyline where Viv Hope (Deena Payne) is raising money for children's charities following the death of Daniel, the son of Ashley and Laurel, from cot death. Viv is subsequently sentenced to three years in prison for fraud after being set up by conman Freddie Yorke.

This newspaper features a custom printed cover with the interior of a genuine Daily Star newspaper of the period, the cover shows Viv posing with her cash-o-meter and a headline reading 'FRAUD, HOPE & CHARITY', this is followed by a small piece relating to the story. Other elements of the paper such as sports news to the verso are reprints of genuine newspaper excerpts and as such make no sense.

The newspaper measures approximately 15" x 12" and remains in excellent production used condition with only minor edge wear and a fold to the centre as you would expect, very fine.

An interesting and displayable artefact from this award winning mainstay of prime time television.