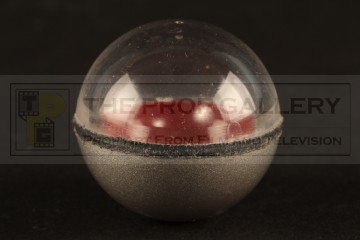 This original air car miniature was created by the BBC Visual Effects Department under designer Jim Francis for use in miniature effects shots, although a few differing scales of air car miniatures are known to have been built the effects were ultimately achieved practically with a full size prop. The miniature is constructed from plastic and features a painted silver base with red interior with a stripe of black tape around the centre and a clear dome to the top.

The miniature measures approximately 1" in diameter and remains in excellent production made condition, very fine.

An incredibly rare artefact from the production of this cult television series.