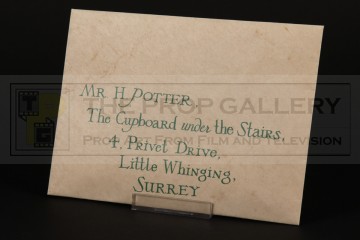 Harry Potter and the Philosopher's Stone

An original Hogwarts envelope used in the production of Harry Potter and the Philosopher's Stone, the first in a series of eight films based on the novels by J. K Rowling.

Hogwarts acceptance envelopes such as this are used in early in the movie in the scenes where they are seen flying from the chimney and into the living room and through the letterbox in the hallway shortly after. Two styles of envelope were created for the production, a hero version with a real wax seal as opened by Harry (Daniel Radcliffe) in the close up and a larger quantity of envelopes with a printed wax seal used where they are seen flying around the room.

This envelope is a rare example of the former, a hero version featuring a wax seal with a letter to the interior which were created in far smaller quantity, on marble patterned paper it features Harry's address to the front with the Hogwarts crest to the rear and seal in red wax below.

The envelope measures approximately 7.25" x 5.25" and remains in good condition with much of the wax seal having broken away however remnants and bleed are present, otherwise very fine.

An instantly recognisable and highly displayable artefact from one of the most successful film franchises in cinematic history.