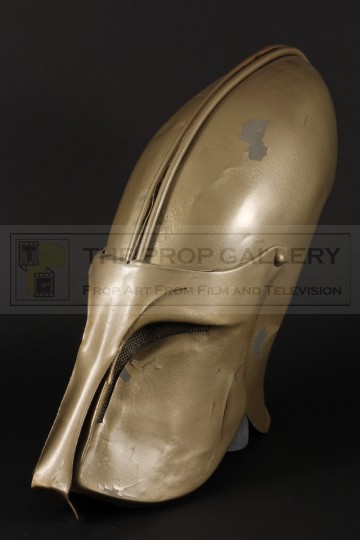 Helmet of Theron - The Leisure Hive

From the 1980 serial The Leisure Hive starring Tom Baker as The Doctor this is an original Helmet of Theron, a central plot device of this season eighteen adventure. The distinctive helmet is one of a number constructed by Martin Adams from vacuum formed plastic, it features a mesh material for the eye holes with pipework running over the crown of the head, despite being made to appear functional the visor on this particular example is static. To the interior the helmet features a head strap of material and the label of maker Martin Adams which remains uninscribed.

The Helmet of Theron stands an impressive 20" high and measures approximately 6.5" wide, it remains in excellent production used condition with some minor paint loss in areas, overall fine.

An incredibly rare, recognisable and displayable artefact from the Tom Baker era of this cult science fiction series.