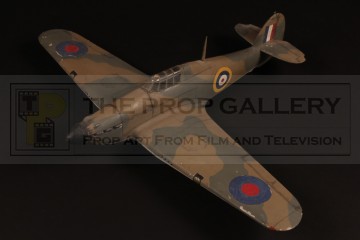 An original filming miniature used in the production of Battle of Britain, the classic 1969 war film directed by Guy Hamilton and Harry Saltzman.

This Hawker Hurricane filming miniature was built for the production for use in special effects shots which were not practical to achieve with genuine aircraft or with remote controlled models. Such effects were handled by Cliff Richardson, multi Academy Award winner Glen Robinson and noted matte artists Wally Veevers and Ray Caple with filming miniatures such as this built in very low numbers, the high standard of the effects work and editing makes their use extremely difficult to spot on screen with one notable exception being the shot where the Stuka crashes in to the tower and as Heinkel comes down in central London.

The miniature is expertly constructed from fibreglass with a cockpit canopy of heat formed acrylic and features a detachable engine cowling which reveals an electric motor and the original battery still contained within, this to drive the rotating front propeller and controlled by a switch concealed within the cockpit. The miniature also features several decals which have been hand painted on paper and applied with the panel line detailing scored in to the surface of the model, the remainder of the camouflage finish being expertly hand painted and weathered. There are various screws which could be removed to use as mounting points in addition to small holes to the wing tips used to rig and wire the miniature for filming.

The miniature has a very impressive 24" wing span and remains in excellent production used condition with some paint wear and minor damage to the rear fins, overall in very fine vintage condition. A miniature similar to this can be seen flying behind the Heinkel cockpit used for filming close ups at Pinewood Studios.

This represents a highly displayable and exceptionally rare example of an original filming miniature from this quintessential British war picture and a truly iconic image from the deadliest conflict in history.