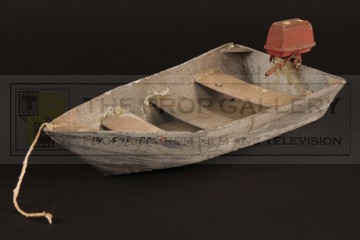 An original miniature used in the production of Hard Rain, the 1998 disaster thriller starring Morgan Freeman and Christian Slater.

This boat is a model miniature representation of the one used by Wayne Bryce (Mark Rolston) as he leaves the Sheriff's office and is seen tossed from as conditions deteriorate. The miniature is constructed from plastic sheeting with a wooden motor finished in red paint and features the registration code 'IN 541 RM' which matches the code on the genuine boat used by Wayne.

The miniature measures over 12" long and approximately 6" at its widest point, it remains in used condition exhibiting damage from production use, numerous repairs and some minor loss of detail. The base is hand inscribed 'HARD RAIN, ORIGINAL MINIATURE BOAT' in pen.

A displayable miniature artefact from the picture.