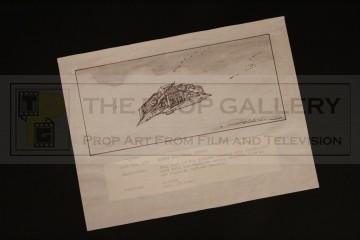 Accomplished in pen and pencil this finely detailed hand drawn board depicts a Snowspeeder zooming over the camera and away into the distance. Believed to be in the hand of assistant visual effects art director Nilo Rodis-Jamero the storyboard is rendered on A4 paper and  is complete with the type written shot details underneath which have been glued to the board from a separate page. All the copies of this storyboard which were distributed to various production members would have originated from this hand drawn original.

The storyboard remains in excellent production used condition with only very small pinholes to the corners, very fine.

A fine piece of original art from one of the most influential and highly regarded franchises in cinematic history.

Please note this storyboard is currently a competition prize - follow the link to enter http://www.thepropgallery.com/star-wars-week-a-stellar-competition