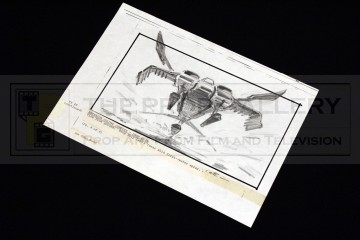 An original storyboard from the production of Aliens, the second instalment in the popular Alien film franchise.

This hand drawn storyboard is accomplished in pencil and details the landing of the Dropship relating to FX shot 49. An extra type written piece of paper has been glued over what was originally hand written notes during production. A nice example of a hand drawn storyboard detailing a visual effects shot for which this film won the 1986 academy award.

The storyboard is A4 in size and remains in excellent production used condition, very fine.