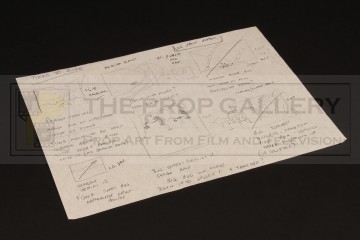 This storyboard artwork was created by model unit director of photography Peter Tyler as the visual effects shots were planned for the Series VII episode Tikka to Ride. The artwork features six hand drawn storyboard illustrations detailing the shots with two containing Starbug and has various notes relating to the shots which are hand inscribed in both pen and pencil, these largely concerning the use of various miniatures and camera movements. Much of the visual effects for Tikka to Ride were ultimately achieved with CGI and the sequence of Starbug separating which is detailed on this artwork was cut from the script altogether although was later seen in the Xtended edition of the episode.

Blank to the verso the artwork is A4 in size and remains in excellent production used condition, very fine.

A rare and unique example of original artwork which offers a fascinating insight in to the production of this cult science fiction series.