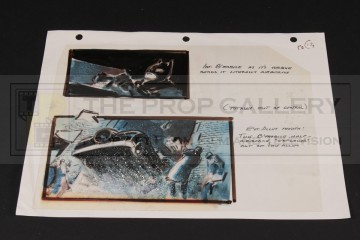 An original artwork used in the production of Batman Returns, the 1992 superhero sequel starring Michael Keaton as the caped crusader under the direction of Tim Burton.

This original hand drawn storyboard artwork was created by artist Nikita Knatz as the production visualised the memorable sequence where the Batmobile races through Gotham City under the control of The Penguin (Danny DeVito). The artwork features two illustrations on artists vellum which have been tipped to a backing sheet (which would appear to contain other drawings underneath), one showing Batman (Michael Keaton) at the wheel of his Batmobile and the other showing the Batmobile out of control on the streets of Gotham, hand inscribed notes are present to the side of each describing the action taking place.

A fine example of original artwork from this classic of the superhero genre.