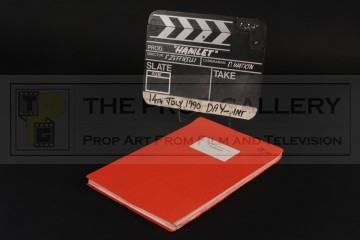 An original clapperboard and script used in the production of Hamlet, the 1990 drama picture based on the play by William Shakespere starring Mel Gibson under the direction of Fanco Zeffirelli.

This original production used traditional style black wooden clapperboard with hinged clap stick bears the title of the movie 'HAMLET' in addition to the names of director Franco Zeffirelli and cinematographer David Watkin. The main unit clapperboard has spaces where the slate, take and scene number could be recorded and retains the hand inscribed date 14th July 1990 from its final use during the production. An identical clapperboard can be seen used in behind the scenes footage.

This is accompanied by an original production script dated 3rd April 1990, this comprising 120 pages bound between front and rear covers of red card with a large quantity of pink revision pages present dated 18th April 1990, hand inscribed annotations and highlighter present throughout with a map of the castle to the back of the script and hand written key to the rear page, inscribed 'ART DEPT' to the front cover.

The clapperboard measures approximately 10" x 8" and remains in very good condition exhibiting edge and surface wear consistent with use during the production, chalk residue present and hole to the centre, the accompanying script remains in excellent production used condition throughout, overall fine.

A rare example of original production material from this Academy Award nominated picture.