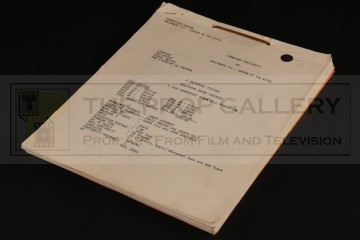 An original continuity script from the production of Halloween III: Season of the Witch, the 1982 horror picture directed by Tommy Lee Wallace.

This post production combined continuity script comprises of 145 pages split in to ten reels in addition to the cover page which features the completion date 14/09/82 with numerous technical details and production credits, this bound by an elastic band connected by a paper clip which is believed period.

The script remains in excellent condition exhibiting only minor edge and corner wear from handling.

A fine example of original material from this cult horror franchise.