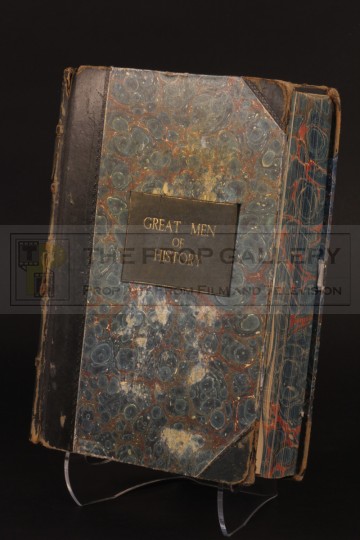 Adventures of Greyfriars Bobby (The)

An original prop book created for the production of the 2006 family film The Adventures of Greyfriars Bobby.

The 'Great Men of History' prop book is gifted to the young Ewan Adams (Oliver Golding) by Mr Grey and is featured prominently throughout the film before being returned to Mrs Grey in the climactic sequence. The book, believed to be one of two made, is a heavily altered copy of an old encyclopedic dictionary which has had thick card covers and spine applied by the production with 'Great Men of History' title to the front and spine. The book has been production distressed to appear old and well used with three inserted pages showing a portrait of Julius Caesar who is referenced in the film, although these portraits of Caesar differ to those used in the final cut the rest of the book is identical in construction.

A rare and displayable artefact from this adorable family production.