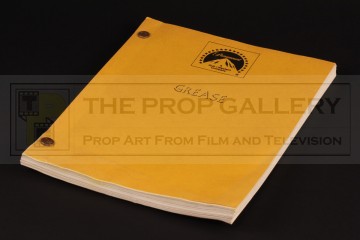 An original script used in the production of Grease, the 1978 romantic comedy starring John Travolta and Olivia Newton-John.

This original production used third draft script is dated May 12, 1977 and comprises of 100 pages bound between front and rear covers of yellow card with the front featuring the name of the movie and the Paramount Pictures logo. The script remains in excellent condition throughout with only minor wear and edge toning, very fine.