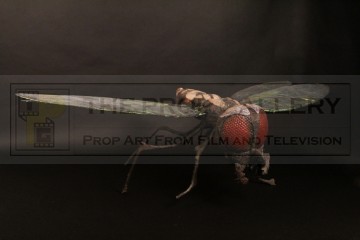 This is the original giant fly used on screen in the production of the classic 1973 Doctor Who serial The Green Death starring Jon Pertwee as The Doctor and Katy Manning as companion Jo Grant.

Faced with BOSS (Biomorphic Organisational Systems Supervisor), a computer with a will of its own and giant maggots that have taken over a rural South Wales village The Doctor must find a way to stop them before the world is swarmed with giant insects such as this one which is thwarted by the trademark cape donned by Jon Pertwee.

This giant fly is one of only two made for the production of this classic story and they one one made in this scale. It was created by a visual effects team led by Ron Oates and Colin Mapson along with a smaller more crude version used for some of flying shots. Originally planned to be filmed on location the fly was largely uncontrollable in the high winds and so the majority of the scenes of the fly in flight were created in a later model effects session while the scenes of its demise and The Doctor driving past were filmed on location in South Wales in March 1973.

The fly is constructed from mixed materials to include a wooden frame and hand carved body believed to be polystyrene and covered in linen cause or similar, then coated in some type of hardening agent and painted. The legs are metal wire coated in a hard latex and the eyes vacuum formed in red plastic. The creature features a plastic tube running from its tail through the body creating a proboscis from which we see fluid expelled onto Bessie's windscreen, the shot was created using watered down pea soup.

The fly has an incredible 69" wingspan stands approximately 18" high, 24" in length with the head measuring around 11" wide. The wings were specially made to be detachable and are able to be removed from the housings within the body, with the wings detached the creature has a leg span of approximately 30".

The creature remains in remarkably good screen used condition, some parts of the body are delicate as are the legs, to be expected given its construction and age. A careful light renovation was completed by ex BBC visual effects artist Mike Tucker to stabilise the prop and prevent any further deterioration. It was at this time that new replica wings were created to replace the absent originals along with one eye which was formed off the existing one. The prop now stands in very stable condition.

An incredible spectacle and without doubt one of the most important and memorable surviving  props from this golden era of the series of which very little remains in existence today.