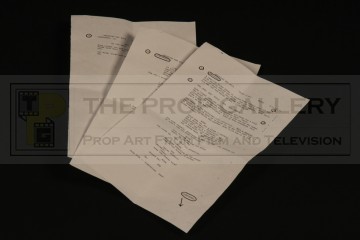 A collection of script pages used in the production of Breaking Bad, the hit crime drama series created by Vince Gilligan.

These script pages are A5 pocket size reductions of the main script frequently used by actors on set during filming. These pages are from the Season Three episode Green Light and were used on set by Giancarlo Esposito as Gustavo Fring, the three pages cover the sequence where Fring meets with Mike Ehrmantraut (Jonathan Banks) in the parking lot and discuss Walter White (Bryan Cranston), they feature some hand inscribed annotations in black pen.

The script pages measure 8.5" x 5.5" and remain in excellent production used condition having been folded to be placed in Esposito's pocket during filming, overall fine.

An affordable example of original material from this highly regarded television series.