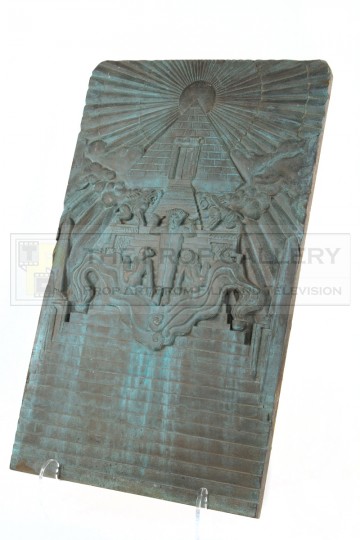 An original prop used in the production of Ghostbusters, the 1984 science fiction comedy starring Bill Murray and Dan Aykroyd under the direction of Ivan Reitman.

This panel formed part of the Gozer temple located on top of Spook Central which was based on the real life building at 55 Central Park West, New York and recreated in miniature by Entertainment Effects Group under model shop supervisor Mark Stetson. Four of these panels were used on the miniature which was constructed at approximately 1:18 scale and utilised in the climactic sequence as Gozer appears and the temple is destroyed, they were first sculpted in clay and depict Gozer on the steps of the temple with the Terror Dogs and are designed as a foretelling of the events which would take place. From the clay master this special panel was cast in a heavyweight composite material and is a fireproof version for use specifically on the side which Stay Puft climbs up, the piece is unpainted to the verso and it hand inscribed 'LEFT SIDE DOOR' to identify its placement on the miniature, evidence of glue remains present to the edges where it was attached during filming.