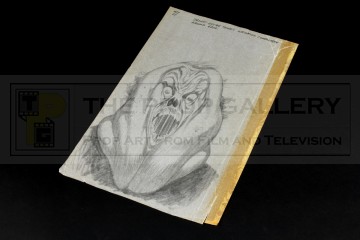 An original concept artwork from the production of Ghostbusters, the 1984 science fiction comedy starring Bill Murray and Dan Aykroyd under the direction of Ivan Reitman.

This hand drawn concept artwork was created by noted comic artist Bernie Wrightson who served as a creature design consultant during the production. Accomplished in pencil on tracing paper the artwork features a conceptual design of the Library Ghost with hand inscribed annotations to the top describing the transformation.