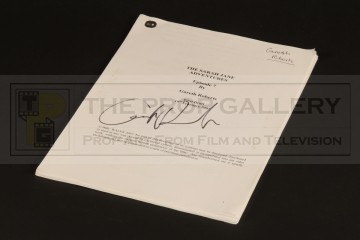 From the 2007 serial Whatever Happened to Sarah Jane? this original production used first draft script for Part 1 is dated 19th February 2007 and comprises of 35 pages in addition to a front cover bearing the name of the series and episode number. This was the personal script of writer Gareth Roberts with the cover hand inscribed with his name to the top corner and signed by him across the front in black marker, furthermore every page of the script is watermarked with his name. The script features numerous annotations throughout with minor dialogue alterations, these inscribed in Roberts' hand.