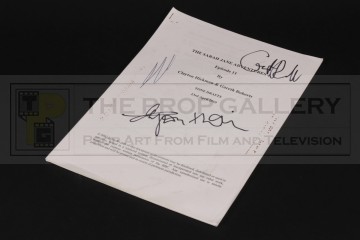 From the 2010 serial Goodbye, Sarah Jane Smith this original production used tone script for Part 1 is dated 23rd April 2010 and comprises of 30 staple bound pages in addition to a front cover bearing the name of the series and episode number. This was the personal script of writer Gareth Roberts and the cover has been hand signed by him and co-writer Clayton Hickman across the front in black marker, the script features some minor annotations inscribed in Roberts' hand throughout.