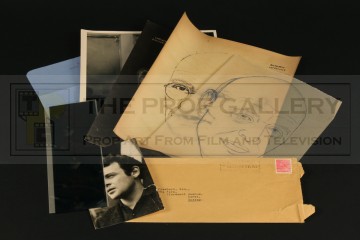 A collection of original material used in the production of Gandhi, the 1982 historical epic based on the life of Mahatma Gandhi directed by Richard Attenborough.

Gandhi was a picture long in the making for director Richard Attenborough, his dream project would be finally realised in 1982 starring Ben Kingsley in the title role however in the various stages of pre production which took place years earlier several high profile actors were considered to portray Gandhi, notably Alec Guinness and Anthony Hopkins with David Lean even attached to direct the picture at one stage.

This archive of material relates to the potential casting of Anthony Hopkins as Gandhi and the make-up effects required to transform him in to the leader which were at this time being handled by noted make-up designer Stuart Freeborn who found fame with the original Star Wars trilogy. The collection comprises of the following

An extremely interesting archive of production material from this highly regarded biopic which was the recipient of eight Academy Awards including Best Picture, Best Director and Best Actor.